This story originally appeared on KRCG TV. View the full story on the KRCG Website.

JEFFERSON CITY — The Catholic Charities of Central and Northern Missouri has expanded its Food and Nutrition Services Program to senior citizens in Cole County after seeing the need local seniors have for nutritious foods.

The expansion has been made possible through a partnership with the USDA and the Food Bank.

The Catholic Charities of Central and Northern Missouri serves 38 counties. Cole County is the first area they have started the program but the group hopes to continue to expand to other areas as well.

Rebecca Jennings is a registered dietitian and AmeriCorps member who works with the Catholic Charities and the American Heart Association’s ‘Healthy for Life’ program. She said much of the initiative came about due to barriers with COVID-19 and a lack of transportation.

“It’s really just seeing the need in the community and that we were so close [to them],” said Jennings. “A lot of seniors weren’t getting out and able to go to the stores especially because of COVID-19 but also because of the lack of transportation so we saw this as an easy way to serve those in our community.”

Members of the Catholic Charities of Central and Northern Missouri, like Jennings and Judith Mutamba, who serves as the Director of the Food and Nutrition Services for Catholic Charities, meet once a month at the Shikles Center in Jefferson City to gather the food and boxes.

The Shikles Center was formerly known as the La Salette chapel/gymnasium but is being transformed into office spaces and a food pantry. Jennings said it is expected to be ready by the end of 2021 or beginning of 2022. 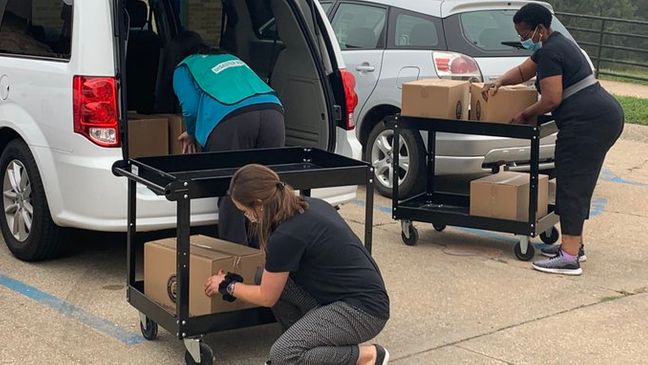 Jennings said the center is a convenient location because it is close to the Jefferson City Housing Authority, which allows them to provide meals to many seniors in close proximity.

The program began in May with about 20 boxes and has now expanded to 200 boxes every month.

The 200 boxes come out to a total of 600 meals distributed each month. Jennings said this will save seniors in the community about $630 a year. 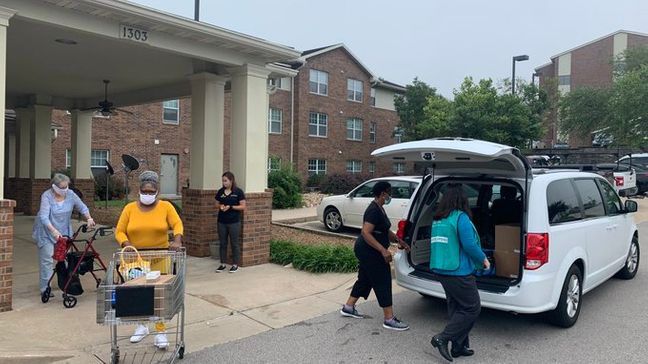 Each senior has to meet certain criteria: they must be at least 60 years of age and meet income guidelines.

Every person who receives food from the program is given a box full of 30 days worth of food and meals.

“It’s not actually meal based but more the full bulk food,” said Jennings. “They are getting food from every food group so they are getting grains, meats, vegetables, fruit, and dairy.

The program not only provides nutritious foods but also encourages a healthy lifestyle.

For example, some seniors are also taking part in a 6-week virtual program that encourages exercise and physical activity. It’s called ‘Walk with Ease’ and was created by the Arthritis Foundation. Jennings said about 60 seniors have signed up for it. Each week the group meets via Zoom to talk about difficulties and successes they have found with getting their daily exercise in. Jennings said many have seen decreases in pain and improved endurance.

“We don’t just want to make access to food but also improve the lives of the people we are donating to,” she said. “We don’t want to give them the lowest quality of food, we want to make sure we are sustaining them long-term and that this is something they can come back and see that we are helping them not just have healthier lives but longevity too.”

Because of COVID-19, the food delivery procedures have been continuously changing. Jennings said they started out by distributing the food to community rooms and they are now doing the delivery outside.

Jennings said they are always looking for volunteers to help with the distribution process but are not at this time because of the safety precautions they are taking.

Those who are wanting to help are encouraged to make a donation to the program.